Corona Virus Update:
Our offices are open and ready to serve. However, we are practicing social distancing by implementing easy to use video conferencing software and phone calls. Your health and your case is our firm's primary concern. Contact us we'll walk you through it. 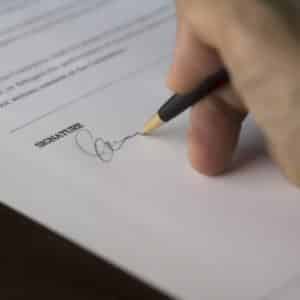 What Is a Reaffirmation Agreement?

A reaffirmation agreement in bankruptcy is a voluntary agreement between a chapter 7 debtor and a creditor that the debt between them will not be discharged. By reaffirming a debt, the debtor promises to repay the debt even though they would not be required to do so and the creditor agrees not to take actions such as repossessing a car or a house as long as the debtor continues making the payments.

Most of the time, it does not make any sense to reaffirm a debt when you are in Chapter 7 bankruptcy proceedings. However in some cases, most often with a car loan or a house, you may want to reaffirm the debt in order to keep the property. Some reaffirmation agreements allow a modification in the debt as well, but not always.

Who Files the Reaffirmation Agreement?

Creditors will often prepare a reaffirmation agreement for you to sign and will try to get you as the debtor to sign a reaffirmation agreement because it will generally put you on the hook for the full amount of the loan. For instance, if you have a car loan for $20,000, by reaffirming the debt, you will still owe $20,000 after the Chapter 7 is completed. You will be allowed to keep the car and continue making payments on the loan but if you fall behind on these payments, there are far fewer protections available.

If you fall behind on these car payments and the car is repossessed, the car will be sold at auction and you’ll still be responsible for the remainder of the balance. This is called the “deficiency balance,” and it can be substantial. Unless you are certain that you will be able to handle the reaffirmed debt (for example, you are starting a new higher paying job) it is generally not a good financial decision not to reaffirm debt.

It is often in a creditor’s best interest to get you to sign a reaffirmation agreement and is to your advantage to have an attorney representing your case present to fight for your interests.

Why Reaffirmation Agreements Are a Bad Idea?

The biggest issue with reaffirming debt, and the reason creditors are eager to offer reaffirmations, is that a person cannot file for Chapter 7 again for 8 years. This means that a creditor has very little risk of losing money on the transaction. Vehicle loans are generally not longer than 6 years, so a creditor knows that by the time a person will be eligible against to file Chapter 7, the debt will have been repaid.

While it is difficult to let prized assets go, it is generally in a person’s best interest. A St. Charles Bankruptcy Attorney can sit down and explain your options, making you aware of your options. Ultimately, the decision to reaffirm debt will be your own. But in most cases, it is best to take the fresh start Chapter 7 gives a person. This way, you can start a new life free of debt instead of carrying unreasonable debt obligations and continuing to struggle.

How Long After I File Bankruptcy Do I Have To Reaffirm Debt I Want To Keep?

A reaffirmation must be filed before the entry of your discharge and no later than 60 days after the date of your first meeting of creditors. You may be able to extend the dealing by filing a request to the court, but you must file the motion before the discharge is entered.

How Can I Get Out of a Reaffirmation Agreement?

You may rescind a reaffirmation agreement but it must happen before the entry of a discharge or before the expiration of the 60-day period after the date the agreement was filed, whichever comes first.

What Is a Reaffirmation Agreement in a Chapter 7?

When a person files Chapter 7 bankruptcy in Missouri, the creditor may give the debtor the option to reaffirm a debt for a particular secured loan. This reaffirmation agreement basically states that a person will continue paying the debt after the bankruptcy is completed and the creditor will allow the debtor to continue using the property. This can be tempting for a creditor as they may wish to keep an item such as a nice car. In general, however, reaffirming debt is not advocated by Westbrook Law Group. It may be difficult to surrender this property, but it is necessary in order to truly get a fresh start.

If you are in the process of bankruptcy or you need help with a reaffirmation agreement, it is best to consult with an experienced Missouri bankruptcy lawyer. We understand how difficult it can be to be mired in debt and we want to help you. This way, you can live free of stress, free of harassment, and free of the problems this debt can bring.

Call today for your free, initial consultation. By discussing your finances with a qualified attorney, you can be sure you are not taking on more debt than you can handle.